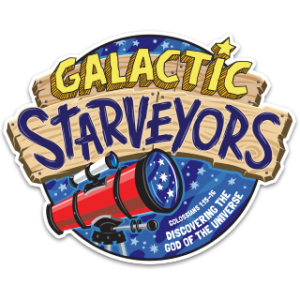 Turn your telescopes to the night sky and join the Galactic Starveyors from their backyard clubhouse where your VBS kids will explore the vastness of space to learn about the infinite God who wants a personal relationship with them.

MUSIC: Like all VBS programs these days, Galactic Starveyors comes with an awesome collection of upbeat new songs and re-imagined versions of favorite hymns and praise songs along with plenty of choreographed dance moves. BUT it’s been a long time since we’ve heard such a catchy and bouncy theme song as “Galactic Starveyors.” Seriously. If the afternoon drowsies hit our office, we pump up the song and banish the blues! It’s techno beat and astro-inspired instrumentation is sure to get the most participation-shy 4th grade boy tapping his toes… at least!

Funny Story: When we first heard the song “Galactic Starveyors” here in the office, we had a hard time figuring out the last line of the chorus. Our team took turns guessing what it says – Praise the All-of-Us Maker? Praise the One and the Maker? The Omnibus Maker? Then Andy popped his head in. In one listen he got it. “Praise the Universe Maker!!!” Of course!

The Heavens Declare the Work of the LORD!

BIBLE POINT: For a theme that focuses it’s lens on the vast loneliness of space, Galactic Starveyors sure talks a lot about relationship. LifeWay boils down the whole universe into the beautiful story God has been telling for eternity; that He created it all as the vehicle for relationship with you and me. On Day 1, “The Relationship Began,” kids learn about the universe God created, from the biggest galaxy to the tiniest cell. Day 2, “The Relationship Broken,” introduces the results of sin and the precarious position we are now in because of the fall.  “The Restoration Promised” on Day 3 sparks hope through the prophecy and birth of “God with Us,” a Savior, born to save us from our sin. On Day 4, “The Relationship Restored,” kids learn about Jesus sacrificial death and resurrection, the Gospel, the key to restored relationship with God. And finally, Day 5, “The Relationship Continues” launches kids into a new life of ongoing transformation and evangelism, sharing the good news with others. It’s a great big universe, with a great big story, that results in a great big relationship with the God who created it all!

SKITS: For your kids, one of the most exciting parts of the morning worship rally will be the Galactic Starveyors adventure film. This daily serial follows Landon and his friends as they use their smarts, creativity, and some pretty awesome homemade inventions, to save Landon’s dad, an astronaut stranded in space on a botched mission to Mars. The four friends, a kind of space-age group of “Goonies,” blast off into an incredible adventure which eventually leads them to trusting the God who made them and the vast universe they seek to explore. Some students, especially those who may have lost a parent, might find the story a little distressing. The filming locations, sets, and special effects are world class – very impressive! Your VBS kids will love the wild ride as the story unfolds day by day.

SETS & PROPS: Your volunteers are going to love building the sets for Galactic Starveyors! Starry skies, planets, comets, and galaxies all make beautiful and exciting set pieces that are relatively easy to recreate. The story line includes a kids’ clubhouse either in a suburban back yard or on the rooftop of a city building with a prominent telescope that brings all the celestial bodies close enough to see. Your lighting tech will have a field day coloring your dark backdrops with the blues, purples, and greens of deep space. From the inside the clubhouse, the windows give set designers a fun way to trick the eye into really believing they open to the sky. Watch the “Decorating Galactic Starveyors” prep videos for some awesome tips for turning your stage into a beautiful, star-filled set.

PRO-TIP: When painting stars on your backdrop, or placing lights to recreate a night sky, keep this one word in mind – Random. In order to keep a realistic look, steer clear of making any pattern with the placement of your stars. If you start making rows and columns with your stars, the pattern will be obvious and the effect of the sky will start to resemble a checkerboard rather than the beautifully complex universe God set in the sky. Also, there’s an old artist’s trick that helps keep a random look in drawings and paintings. Always place clusters of stars in odd numbers, and most often in clusters of 3. For some reason, the human eye doesn’t see patterns in threes as easily as it does in fours.

Choose your template or get a custom design!

EXTRAS: LifeWay’s essentials pack is loaded with good stuff for your VBS, including the super cool moulded plastic telescope case it comes in. We picked our favorites and hope it helps you as you prepare for Galactic Starveyors at your church:

Purchase your copy of Galactic Starveyors from LifeWay HERE.